Controlling lights from the web using Raspberry Pi and Arduino

I've just got back from a weekend with my parents, where I had lots of fun attempting to get an Arduino Uno to control a cheap set of remote control mains sockets.  My dad has a set of 3 of these (http://www.maplin.co.uk/remote-controlled-mains-socket-set-531547) and has them plugged into desk and pedestal lamps in the living room.  Since my last two christmas/birthday presents to him were a Raspberry Pi Model B, and a book about home automation using Arduino, he'd picked up an Arduino starter kit from Amazon, and had bought a second remote control and taken it to pieces, all we needed was some solder and some code.

Next, import the library from https://code.google.com/p/rc-switch/, then write a quick app to set switch one on and off.  Once we'd proved this works, we worked through a quick example using a photodetector, then decided it'd be fun to get this working over the web.  Since we didn't have any network connectivity, we roped in the Raspberry Pi to serve a very basic website, and use the Pi's GPIO to signal to the Arduino to turn on the lights.  I hope you'll forgive the gross insecurity of the web server, but it's quick and does the job - here's the code:

And a photo of the Arduino all wired up: 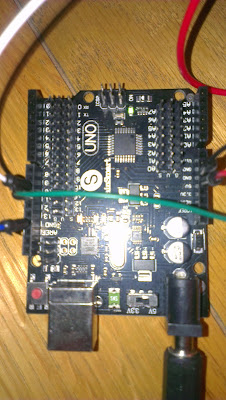 Tetris & The Power Of CSS

I found this link today, it's an excellent read, and explains succinctly what I've been wanting to do with my photo library for ages.

Tetris & The Power Of CSS
'via Blog this'

Another good one, which I haven't got round to implementing yet is this:

The algorithm for a perfectly balanced photo gallery