I bought my B-Max from a Ford dealer in Kent just over 2 years ago and I've now done 38000 miles in it.  I thought I'd share why I bought it, and hope my insights are useful to others.

The car had to be a certain length to fit with the other car on the driveway, so anything too long was immediately out of the question.  There's not a huge amount of cars in that bracket that can fit a family of 4, but the extra 6 inches of length and headroom over the fiesta makes a big difference in rear legroom.  It means there's enough room for my 18 year old daughter to sit comfortably.

The boot is just about big enough for two suitcases, as there is a board that comes out, to give a level loading surface, or a slightly deeper boot space.  It's packed full for a week-long family of 4 holiday but it's just about enough.  We wouldn't survive if my youngest still needed the baby paraphernalia.

I bought the Titanium edition, as a key requirement for me was that I wanted cruise control.  I commute for 2 hours every day, and you end up with a sore foot otherwise!  The Sony stereo is really good quality and I can plug a 128GB USB stick  and have all my MP3s in the car, with voice control to select the artist or album.  There's also a second cigarette lighter plug in the centre console which is ideal for powering chargers for the kids in the back seat.

This was one of the most important decisions for me - I wanted an automatic transmission, but that was only offered on the much older 1.6L engine, and the EcoBoost 1.0L engine was more important too me, both for fuel economy and the fact it has start-stop engine technology.

I went for the 120bhp Ecoboost engine option to give the car a little bit more oomph (the standard engine is 100bhp), and I'm happy to say that unlike my old 1.2L Honda Jazz, I can keep it in 5th gear and still accelerate up hills!

I use the Android app Fuelio to track my fill-ups, and I'm getting an average of 44.3 mpg.

I bought a service plan from the dealer for £24 per month, but as I've done more mileage than the salesman put down for, I've exhausted it after 2 years (rather than 3).  It was nice to have while it lasted.  The only thing that's gone wrong with the car is a brake-light bulb which was spotted and replaced at service.  The garage also send you a YouTube video of your car being inspected, which is a nice touch.

I'm on a 36 month PCP, and ideally when I get my next car it will be electric or at least hybrid-electric, which sadly with the current range rules out a lot of Ford models.  There won't be a new B-Max and the closest two cars - the Fiesta Active and the Ecosport - are both SUV-style, which doesn't really float my boat.  I'm keeping a keen eye on the new Nissan Leaf.

Top 3 things to do in Tromso, Norway

A few weeks ago I was lucky enough to visit Tromso in Norway to see the northern lights for my wedding anniversary with my wonderful wife.  Rather than sticking everything on TripAdvisor I've documented it here:

We flew to Tromso from London with Norwegian Airlines.  The outbound flight was via Oslo but the return was direct back to London Gatwick.  We went Friday morning to Monday evening. We were quite impressed by the transfer in Oslo - as you go through passport control a picture of your suitcase pops up and asks you if this is your luggage.  There was also facial recognition for passport control rather than a long queue for a border guard.

The hotel we stayed at was Skansen hotel.  It was fairly basic but nice enough.  The staff were incredibly friendly and helpful.  It's only a minute's walk into town too.  There's a basic breakfast buffet included but no dinner restaurant.

Tromso is quite a small city, the airport is a few miles outside, through a network of tunnels, the taxi cost around £15.  We went in February and the high street was covered in a couple of inches of ice, but the pavements either side were clear.  Where the pavements weren't clear there was a layer of gravel.  This is a different approach to the UK, rather than salt to melt the ice the gravel just makes the ice grippier.  There's a few shops, and a huge number of hair salons, the reasons for which we couldn't fathom.  There's only one shop in the city which has an off-licence, so once we'd found it we bought a bottle of wine for the hotel room.  The wine, along with everything else was quite pricey due to Norway's strong economy, and our rubbish one. 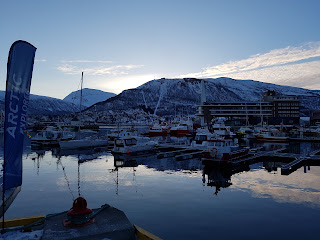 We ate out at two really nice restaurants, at different ends of the scale - a pizzeria called Peppe's and a restaurant called Kitchen and Table.

We ordered a large pizza between the 2 of us at Peppe's and we're glad we did as I've never felt full after a single slice before, there's no way we could have eaten one each as I was originally considering.  It was really nice with a draught beer.

Kitchen and Table was a different proposition - fine dining, and prices to match, but the food was delicious and strongly recommended.  Not a huge choice but everything we had was well presented and very tasty.

With that out the way, here's the top 3 things we did, and would recommend anyone do in Tromso, Norway:

Polaria is an aquarium and education centre a few minutes walk from the centre of Tromso, there's a gift shop, cafe, cinema screen and various bits to see and do.

The cinema screen is a very wide wrap-around display which shows nature and conservation videos on a regular schedule.  The main attraction though is the aquarium - there's a walk through glass tunnel where you can observe the two species of seal they have, and a couple of times a day is a really good show with the seals, in which you genuinely believe the seals are enjoying themselves rather than just being about entertainment for the audience.  Allow around 3 hours.

We found this prior to the trip on TripAdvisor and booked through them for the Monday morning starting at 8:30am.  Everyone meets in the Clarion hotel near the harbour and a coach takes you to the huskies, which was about a 30 minute journey.  Each couple gets a sled and 6 dogs and you're taught everything you need to know to stop/start/control the sleds.  It was a great experience and the dogs are lovely.  I took a few short videos on my phone as you can only bear to have your hands out of the gloves for around 20 seconds at a time. 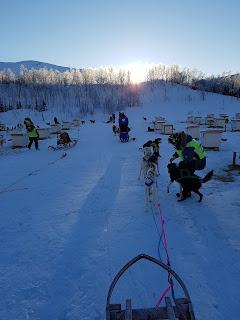 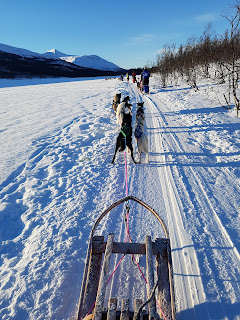 Again we found the tour on TripAdvisor prior to arrival. A minibus picked us up at 7:30pm along with 5 others and we set of in search of the darkest place we could find.  Once away from the lights of the city, the sky was magnificent, and we didn't have to wait long.
We were very lucky to have two good 'shows' on the night, one about an hour into the trip and one just before midnight.  There had been a solar 'storm' about 5 days before and I think we caught the tail end of it.  Within 2 hours of getting out of the minibus we were all desperate for the provided snow-suits and warm snacks despite already wearing every item of clothing we had.  I alternated between marshmallows over the fire, and nipping to my camera to take more photos.

I took my Canon EOS 650D SLR with the Canon 17-85mm lens and a Manfrotto tripod.  I used a 20-30 second exposure with the lens wide open most of the time (lowest F-stop), focussed manually at infinity.  I set the ISO to 400-800 and recorded the images in JPG+RAW so I could post-process them afterwards.

An article I read warned about dew building up on the lens, but I didn't have any such problems, and the battery survived the cold temperatures fine.  Here's a couple of photos taken straight from the back of my SLR screen.  If you're interested in seeing the full-size processed images let me know! 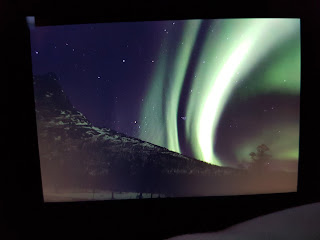 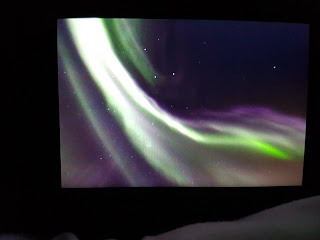 A few people didn't have their own cameras, but the guide took many of his own pictures and shared them with us afterwards, including ones with us in them, by 'painting' us in with a torch flash to get the exposure correct.

We were really lucky to be able to see the aurora and we've just had it blown up on a large canvas to put in our hallway.

I would not hesitate to recommend Tromso, there's no guarantee you'll see the lights but it's a brilliant experience - just wrap up warm!
Posted by . at 14:02 No comments: